Willful Misrepresentation/ Waiver for Fraud ( I-601 )

Home |US Immigration News|Willful Misrepresentation/ Waiver for Fraud ( I-601 ) 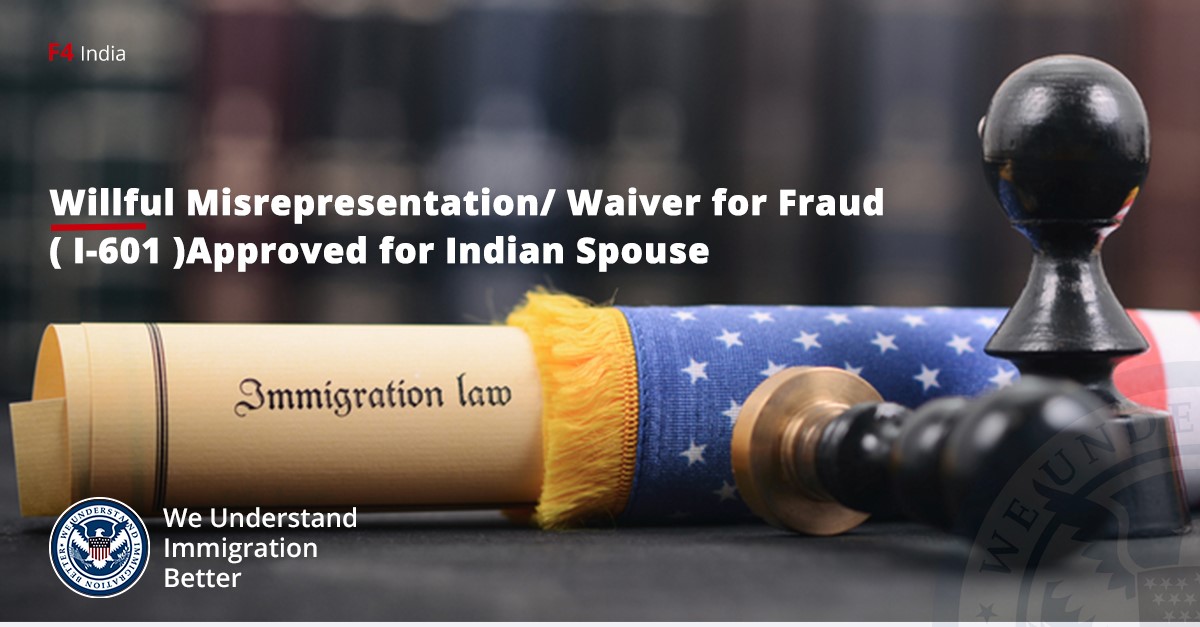 We at F4 India Law Firm obtained approval of the I-601 Application of Waiver of Grounds of Inadmissibility for the Indian Husband of a United States Citizen That had been subject to a life-time Ban for fraud/misrepresentation under INA Section 212(a)(6)(C)(I).

Any alien who, by fraud or willfully misrepresenting a material fact, seeks to procure (or has sought to procure or has procured) a visa, other documentation, or admission into the USA or other benefit provided under this Act is inadmissible.

Our client entered the United States lawfully on a legal non-immigrant visa, He fell in love with a United States Citizen Girl and got married Today they've been married for 16 years. He returned to the India to pursue his studies, planning to return to the United States after graduation. He failed to disclose a previous marriage on his first visa application and was consequently charged with fraud / deliberate misrepresentation pursuant to INA Section 212(a)(6)(C)(I) and deemed inadmissible in his immigrant visa interview.

F4-Attorney: I was contacted with the client to assist them in planning and obtaining approval of the I-601 waiver after the finding of inadmissibility from the United States embassy in Delhi, India. An I-601 Application for Waiver of Grounds of Inadmissibility requires a showing that the applicant’s United States Citizen spouse or parent could suffer “intense hardship” when the applicant is denied admission into the US. ”Extreme hardship” has a special meaning under United States immigration law.

The factors considered relevant in determining intense hardship include:

Extreme hardship is “not a term of fixed and inflexible content or meaning,” but depends on the facts and circumstances peculiar to each case. The factors include the presence of a lawful permanent resident or USA Citizen spouse or parent in this nation; the qualifying comparative ’s family ties outside the US; the conditions within the nation or nations to the qualifying relative would relocate and the degree of the qualifying comparative’s ties in such countries; the monetary impact of departure from this nation; and significant conditions of health, particularly when connected to a unavailability of appropriate health care within the nation to the qualifying relative would relocate.The Board added that not all the foregoing factors have to be analyzed in any given case and emphasized that the list of factors wasn't exclusive.

The Board has also held that the common or average results of elimination and inadmissibility don't constitute extreme hardship, also has listed certain human hardship factors considered common as opposed to intense. These elements include: economic disadvantage, reduction of current employment, inability to keep one’s present standard of living ,inability to pursue a chosen profession, separation from family members, severing community ties, cultural readjustment after residing in the US for several years, cultural readjustment after residing in the US for several years, cultural adaptation of qualifying relatives who've never lived outside the US, inferior economic and educational opportunities in the foreign nation, or even inferior medical institutions in a foreign country. Nevertheless, though hardships might not be intense when considered abstractly or separately, The true hardship associated with the abstract hardship factor like family breakdown, economic disadvantage, cultural readjustment, differ in character and seriousness depending upon the distinctive circumstances of every case, as does the accumulative hardship a qualifying relative experiences as a consequence of aggregated individual hardships.

Consequently, The AAO considers the totality of the circumstances in determining whether a denial of admission would result in extreme hardship to a qualifying relative.

We prepared a thorough I-601 waiver application such as a 20 pages legal brief going over the facts and conditions of our client lives met the legal criteria used to identify extreme hardship. Particularly, this involves the day-to day care that the United States Citizen partner supplies to her elderly father, who suffers from diabetes Sugar, high blood pressure, and heart problems. The United States Citizen partner lives with her elderly mother plus they're dependent on each other to overseas and manage the health care they vitally need.

More Details - if the United States Citizen spouse be compelled to relocate to the India to be with her husband, her elderly mother will lose her main support given ,This might be potentially life threatening to her elderly mother given her fragile state, and such an event could traumatically impact the physical and psychological wellbeing of the United States Citizen partner which is already compromised. Alternatively, if the United States Citizen partner need to stay in the United States Without assistance from her husband, her personal fortune will similarly continue to deteriorate, impacting the welfare of United States Taxpayers who desperately need the existence and assistance of the waiver applicant in their own lives. In these kinds of situations, it's important to present and establish the hardships of close relatives whose well being are intimately tied to that of the qualifying relative, and also demonstrate how both parties could be affected by the immigration implications of their situations.

As a consequence of our effective and serious efforts, our client has been accepted for the I-601 Waiver and therefore, Now this happy couple living legally in the United States together once more following a separation of more than seven years apart.