Misrepresentation or Fraud Waiver(I-601,Waiver Of Grounds Of Inadmissibility) 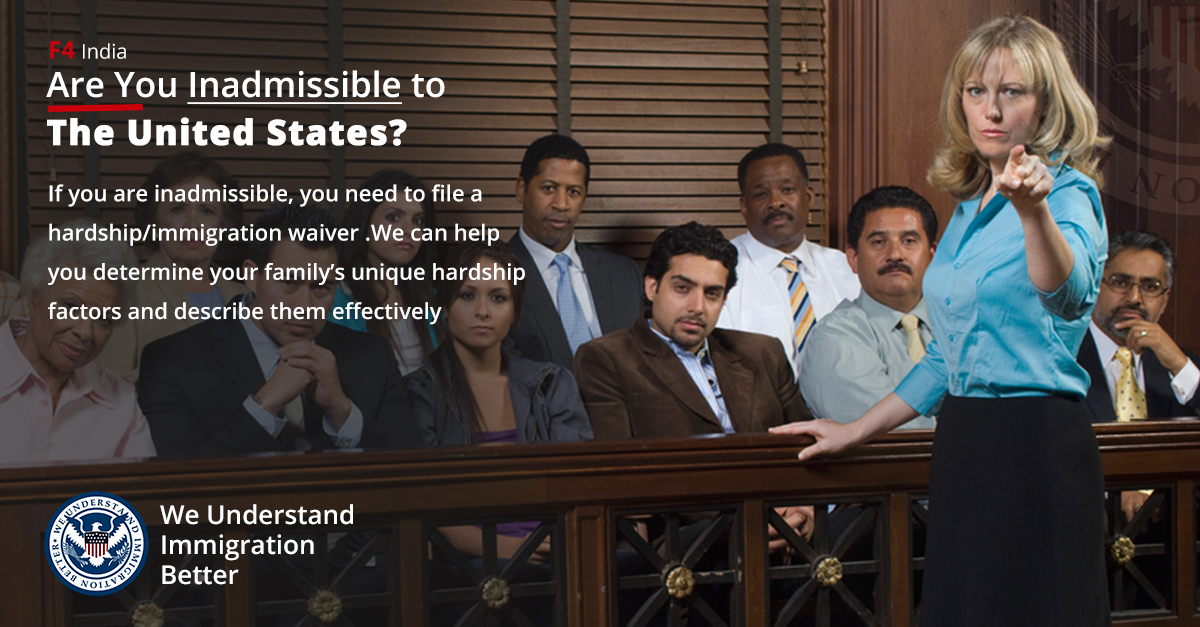 US Immigration law is complex and subject to sudden changes, thus it's a good idea to contact an immigration attorney who has extensive experience filing waiver applications. Every case is different, only experienced attorneys can identify the factors that can make or break your application. Seeking legal advice from an attorney is the best idea as they can tell you more about the I-601 waiver based on your individual situation. The globally recognized team of F4 India has the experience to guide you through the application process.

Why Do You Need Our Attorney To Help You With Your Immigration Waiver?

Our Experienced Attorneys are better equipped to understand the waivers and determine how it applies to your specific situation. You will save your time, avoid risks, minimize stress, and receive maximum benefits while working with us, without our guidance, the process is usually much more overwhelming and the outcome is much more uncertain.

U.S. Immigration law is complex and ever-changing. The decisions and findings are often completely discretionary and highly subjective. A small mistake could end up costing you more money in the long term, result in unnecessary delays, and lead to denial of the petition/application and even deportation from the United States.

We’ve seen so many clients mess up their case because they tried to do things themselves, without any professional guidance. If you are not clear exactly what you are doing, get legal advice and representation from an experienced attorney.

Are You Inadmissible to The United States?

If you are inadmissible, you need to file a hardship/immigration waiver (I-601, I-601A, or J1)? F4 India Law Firm can help you determine your family’s unique hardship factors and describe them effectively. Contact us to analyse your case and know about our approach to preparing successful waiver applications.

We are the best US Immigration Consultants in Jalandhar, Punjab, India. We represent cases from all over the world.

If you are inadmissible, you need to file a hardship/immigration waiver (I-601, I-601A, or J-1)? F4 India Law Firm can help you determine your family’s unique hardship factors and describe them effectively.

Contact us to analyse your case and know about our approach to preparing successful waiver applications.

What is a Hardship Waiver?

A hardship waiver application, is an opportunity to explain how your U.S. citizen or permanent resident family member would experience hardship if you were not able to reside in the United States.

There are three types of hardship considered in every waiver application:

Why am I Inadmissible?

If you have obtained or attempted to obtain an immigration benefit by willfully presenting fraudulent documents or false information to an immigration officer or on an immigration application, you are inadmissible. The misrepresentation/fraud inadmissibility bar is a lifetime bar

Who Will Be Considered As A Qualifying Relative?

What are the Hardship Factors?

Physical Hardship: How your qualifying relative’s physical health and well-being will suffer if you are not able to remain in the United States. This includes serious health issues of a qualifying relative that would negatively affect your relocation?

What is the Process For Filing a Hardship Waiver?

There are several processes that include the filing of a hardship waiver:

If you have accrued unlawful presence in the United States, and it is your only inadmissibility, you can file an I-601A provisional hardship waiver application to a USCIS lockbox in the United States, but that can be filed only after an I-130 Petition has been approved with you as the beneficiary. If your I-601A provisional hardship waiver application is approved, you will then submit an Immigrant Visa application through the National Visa Centre. You have to go back to your home country in order to attend your Immigrant Visa interview at the U.S. Embassy or Consulate in your country of citizenship. If you had a successful interview, you will be issued your immigrant visa. After entering the United States with your immigrant visa, you will be a lawful permanent resident and will receive your green card in the mail.

If USCIS issues a Request for Evidence following your I-485 interview asking for an I-601 hardship waiver application, you will submit your I-601 application to a USCIS lockbox in the United States and a copy of the application to your local USCIS office.

Wilful Misrepresentation/ Waiver for Fraud (I-601) Approved for Indian Spouse

We at F4 India obtained approval of the I-601 Application of Waiver of Grounds of Inadmissibility for the Indian Husband of a U.S. citizen That had been subject to a life-time Ban for fraud/misrepresentation under INA Section 212(a)(6)(C)(I).

Any alien who, by fraud or wilfully misrepresenting a material fact, seeks to procure (or has sought to procure or has procured) a visa, other documentation, or admission into the USA or other benefit provided under this Act is inadmissible.

Our client entered the U.S. lawfully on a legal non-immigrant visa, He fell in love with a U.S. Citizen girl and got married Today they've been married for 16 years. He returned to the India to pursue his studies, planning to return to the U.S. after graduation. He failed to disclose a previous marriage on his first visa application and was consequently charged with fraud / deliberate misrepresentation pursuant to INA Section 212(a)(6)(C)(I) and deemed inadmissible in his immigrant visa interview.

Out team was contacted with the client to assist him in planning and obtaining approval of the I-601 waiver after the finding of inadmissibility from the U.S. embassy in Delhi, India.

An I-601 Application for Waiver of Grounds of Inadmissibility requires a showing that the applicant’s U.S. citizen spouse or parent could suffer “intense hardship” when the applicant is denied admission into the US.

“Extreme hardship” has a special meaning under U.S. immigration law. The factors considered relevant in determining intense hardship include:

Any other information that clarifies how your personal circumstances might qualify as imposing intense hardship on a qualifying U.S. Citizen or legal permanent resident relative.

Spouses must demonstrate that their relationship will endure more than the standard hardship or inconvenience caused by family separation.

Extreme hardship is “not a term of fixed and inflexible content or meaning,” but depends on the facts and circumstances peculiar to each case.

We prepared a thorough I-601 waiver application such as a 20 pages legal brief going over the facts and conditions of our client lives met the legal criteria used to identify extreme hardship. Particularly, this involves the day-to day care that the U.S. Citizen partner supplies to her elderly father, who suffers from diabetes Sugar, high blood pressure, and heart problems. The U.S. Citizen partner lives with her elderly mother plus they're dependent on each other to overseas and manage the health care they vitally need.

More Details - if the U.S. Citizen spouse be compelled to relocate to the India to be with her husband, her elderly mother will lose her main support given ,This might be potentially life threatening to her elderly mother given her fragile state, and such an event could traumatically impact the physical and psychological wellbeing of the U.S. Citizen partner which is already compromised. Alternatively, if the U.S. Citizen partner need to stay in the U.S. Without assistance from her husband, her personal fortune will similarly continue to deteriorate, impacting the welfare of U.S. Taxpayers who desperately need the existence and assistance of the waiver applicant in their own lives. In these kinds of situations, it's important to present and establish the hardships of close relatives who’s wellbeing is intimately tied to that of the qualifying relative, and also demonstrate how both parties could be affected by the immigration implications of their situations.

As a consequence of our effective and serious efforts, our client has been accepted for the I-601 Waiver and therefore, now this happy couple living legally in the U.S. together once more following a separation of more than seven years apart.

I-601 And I-601A Waivers Are Very Similar In What They Cover (Extreme Hardship), They Are Very Different In Other Ways.

The I-601A Waiver applies to the inadmissibility of unlawful presence. if you are reading this on our website and you’ve been found inadmissible for misrepresentation/fraud and/or a crime involving moral turpitude:

What are The Main Benefits Of The I-601A Waiver?

The applicant will know – before having to leave the U.S – if his or her waiver has been approved. I-601A Applicants are required to return to their country to attend an Immigrant Visa interview at a U.S. Embassy or Consulate.

The interview took place before an intended immigrant could file a hardship waiver, which meant two things:

The I-601A Waiver is such an advantage because the immigrant gets to leave the U.S with more certainty and less time away from his or her family.

It is very important that you make sure you are eligible for an I-601A Waiver before you file one.

You may submit the waiver in error, have it approved by USCIS, and still end up being denied your Immigrant Visa. This will leave you stuck outside of the U.S for months, a year or more, or – in the most unfortunate cases – forever.

How Can You Avoid It So That It Won’t Happen To You?

SPEAK WITH AN IMMIGRATION ATTORNEY BEFORE PROCEEDING. Even if you think you can file this application on your own, consult with an immigration attorney who has experience with Hardship Waiver Applications, which are some of the most complex immigration applications. They take a great deal of time, attention, and care to prepare properly. 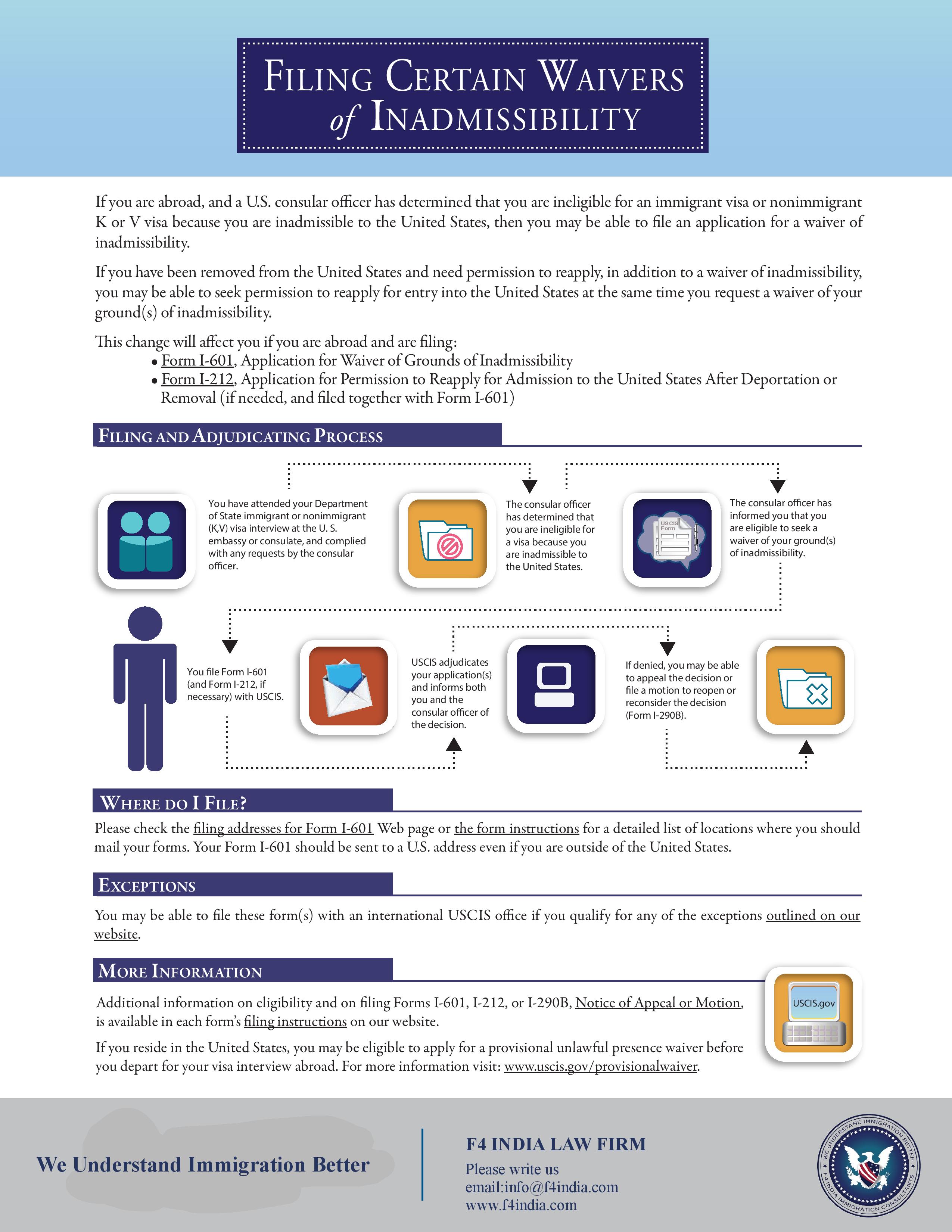 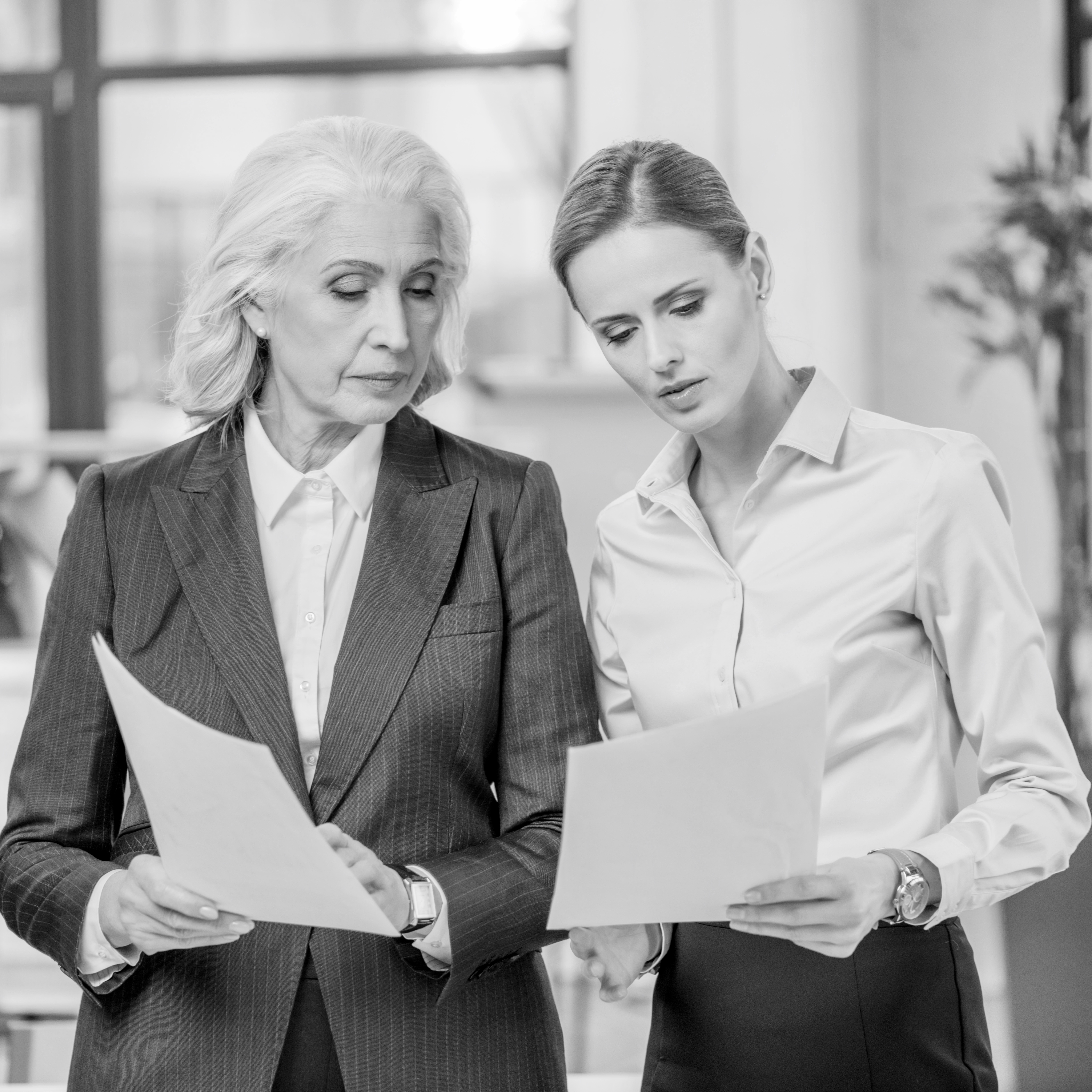